Everything In Life We’ve Learned In Kindergarten 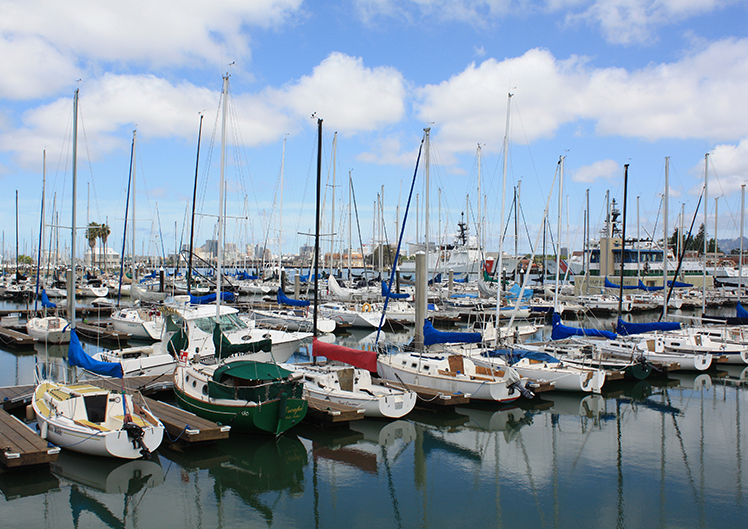 “Sometimes, you don’t know that your life was weird until you look back on it later,” Hans says with a smile as he takes a sip of coffee and sits forward in his chair. I’ve asked him to meet me at a cafe in Alameda, California to tell me about this so-called weird life of his. He’s originally from Michigan, land of freezing winters and lots of lakes. As a boy, he spent a lot time on boats and always dreamed of someday living in California.

“During the first summer I worked here,” he says, “this young blonde gal at the docks put on a wetsuit and skis and went out waterskiing–and this was at lunchtime, on a Tuesday! And I thought, I knew they were doing this type of stuff in California!”

Alameda is an island town just west of Oakland. Naturally, it’s surrounded by water and naturally, too, by boats. So how did Hans Kaufmann wind up on the docks of Alameda in the summer of ‘85? How did his love for all things nautical lead him into a life of yacht racing–a name he tisks at for being too snooty–and to meet his now-wife? How did this passion lead him into a job with CHC and lastly: what are the weird parts?

Michelle Kicherer (MK): So what was so weird about your upbringing? What were your parents like?

Hans Kaufmann (HK): Well, I grew up with three sisters…then in 1962 my dad died of cancer, quite suddenly, which left my 26-year-old mother with four little kids. And maybe because it was the sixties, or because she was so young, we really didn’t talk about that loss very much. For a while, my grandparents took us in so my mom could attend nursing school. We lived in a small, unincorporated town called Oscoda, which was right on Lake Huron. Now that was interesting. My mom dated a naval architect who built his own boat that we all sailed on. That’s where my love of sailing began. He built a small boat for me that I sailed on Whitmore Lake. For whatever reason, that relationship didn’t last. 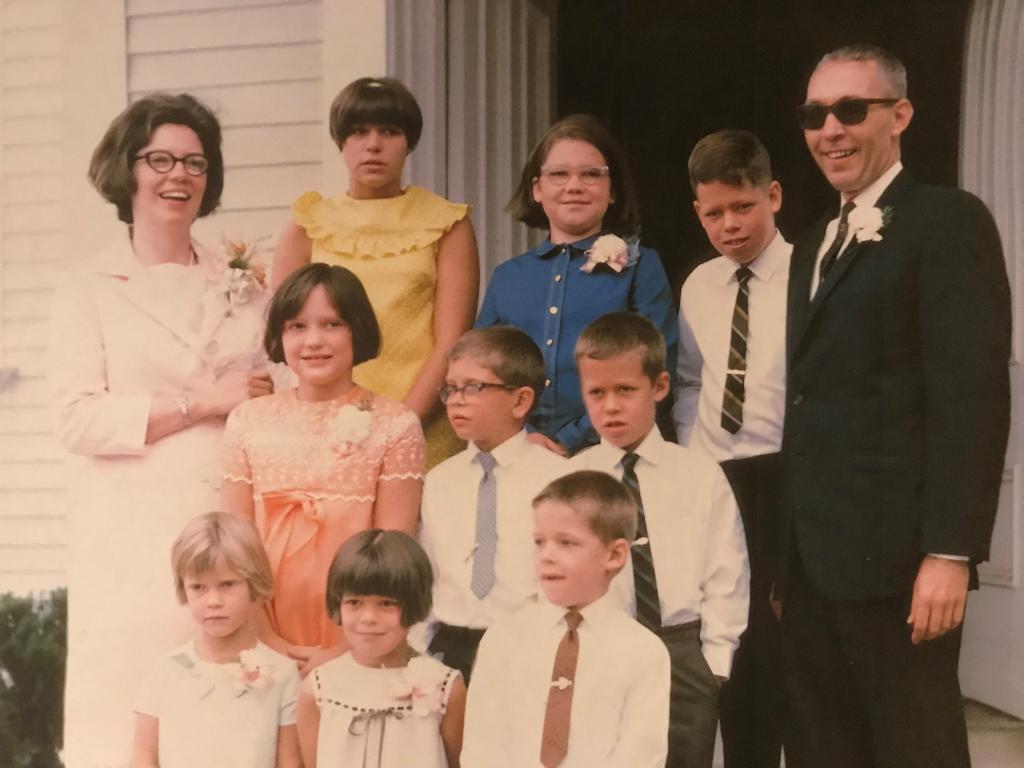 HK: At some point, my mom was dating this guy whose wife had died of cancer, and he had five kids, so we were basically The Brady Bunch but less cheery (he laughs). As you can see from the photo, not all of us were terribly pleased.

MK: Wow, that is a lot of kids. So when you were older you moved away, or how did you first start on your career path–or boating path?

HK: When I was a kid, I bought a lawn mower from this guy for like 5 bucks and brought it home to realize it didn’t work. I messed with it for a while…then when that thing lit up, it was like wow! I mean, that really excited me…I always loved fixing things; figuring out how things worked. After high school, I worked in a factory that manufactured car parts. I got home after my first day exhausted and thought, well I don’t want to do that for 30 years. The camaraderie was enticing but it wasn’t for me.

MK: What was for you? What led you to California?

HK: After studying engineering at Northern Michigan University, I moved to Alameda in 1985 and got a job working for NorCal Yachts. I rigged new sailboats and worked on diesel engines and thought how am I getting paid to do this? Working there is where I met BZ (short for Beatrice), my wife. I asked her out a couple of times–movies? No. dinner? No. Then I asked if she wanted to go out on a sailboat race. Yes! 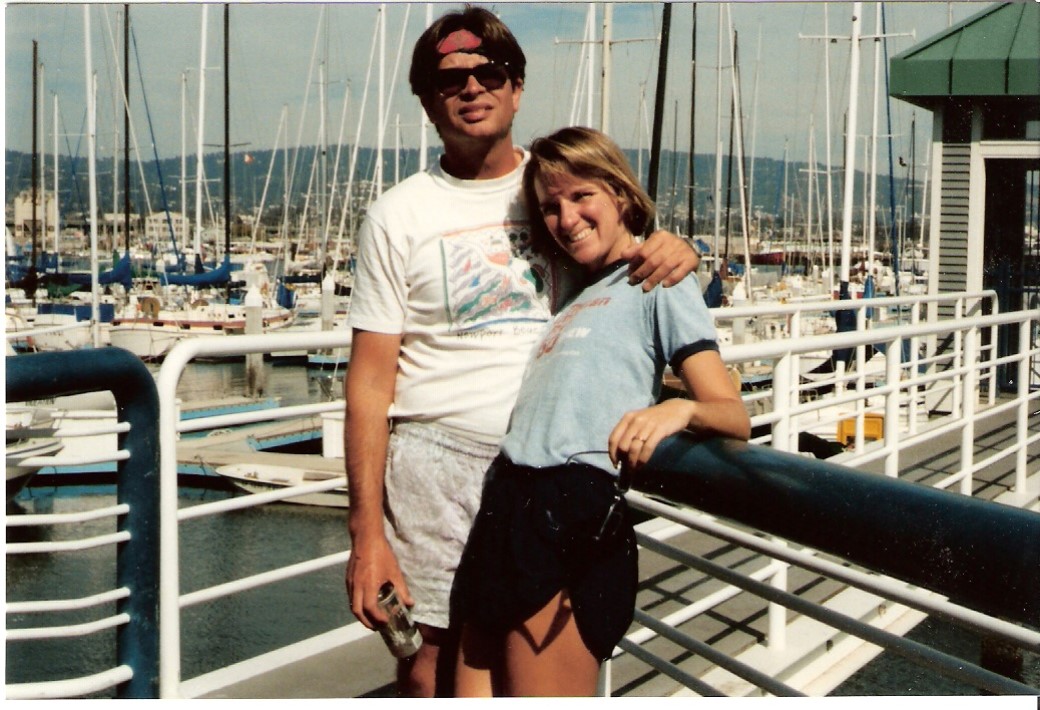 MK: That’s an awesome first date! How did your work on boats lead you to working in Business Development for CHC? How do those two skill sets overlap?

HK: One of my yachting clients owned Pan Pacific Supply, in Concord. He dragged me out of the boatyard and into industrial sales. I got a lot of experience there learning all about pumps and it fit in with what I studied in college. By the time I came to CHC it was perfect because I got to work on projects that help make our customers happy but I’m not actually selling anything–I don’t walk out of their office with a PO so there’s not that pressure on them or on me, which is nice!

At this point, we move from the cafe to the docks because I want to learn more about sailboats. Hans and I stand at the gate of the marina admiring the view, the boats. I can tell he’s at home here. As we walk down the ramp and onto the docks he says over his shoulder, “See that one right there?” he points to a white boat with maroon-colored canvas and the name Main Squeeze. “That’s the first boat I took BZ on.” 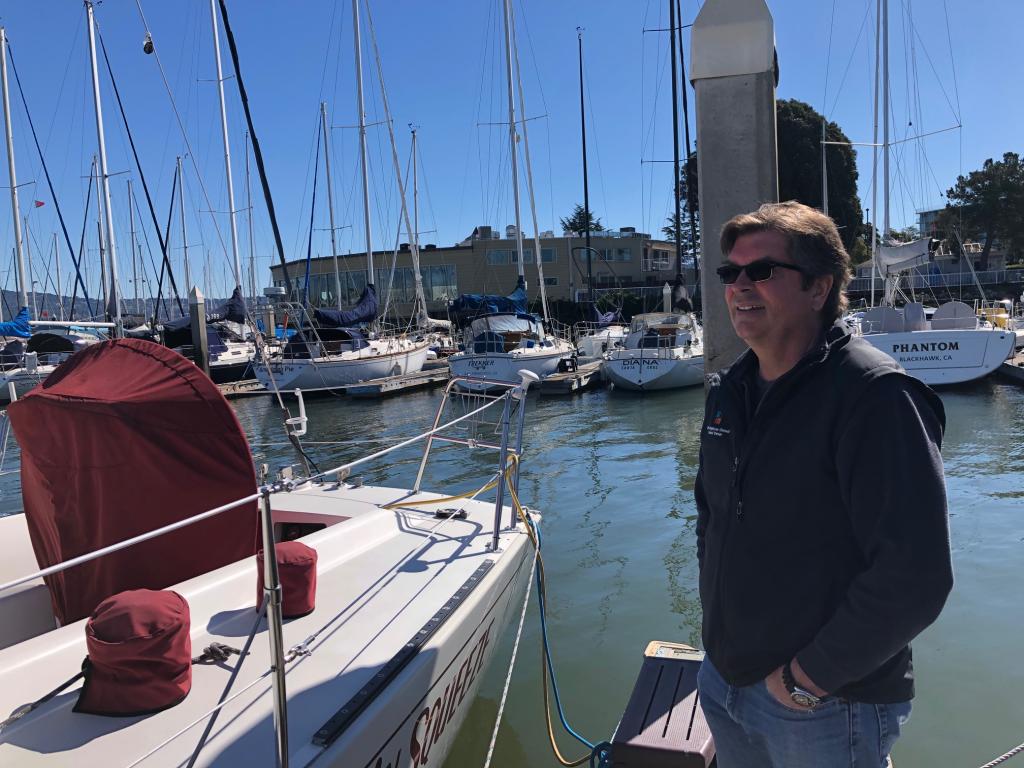 MK: That’s so amazing–I wasn’t expecting it to still be here.

HK: Isn’t that something? Yeah, a lot of these boats are twenty, thirty, forty years or older; you just have to maintain them. Alright, this one here (he points to a boat down the dock, takes his shoes off, and climbs aboard. I follow his lead)…this is one I race on a lot.

MK: So tell me more about this yacht racing situation? What is that?

HK: I got started racing back in ’85 when I worked at the boat yard. First it was the Friday night beer can races. More comradery then competition. It was a great way to end the work week. From there as my skills and knowledge improved, I got better offers on more competitive boats for more serious bay and ocean racing. My boat yard skills provided the credibility to get me on board and my jokes always got me invited back. You eventually get a reputation in the racing community and if it’s a good one, you can race as much as you want. After 30 years, April through September, I still sail the Friday night beer can races at Encinal Yacht Club. It’s something to look forward to and a great start to the weekend.

MK: How many people are on a boat for a race?

HK: It takes ten people to race this boat competitively and everybody’s doing a couple things. There’s a lot going on.

At this point we go below, and Hans shows me the control system. 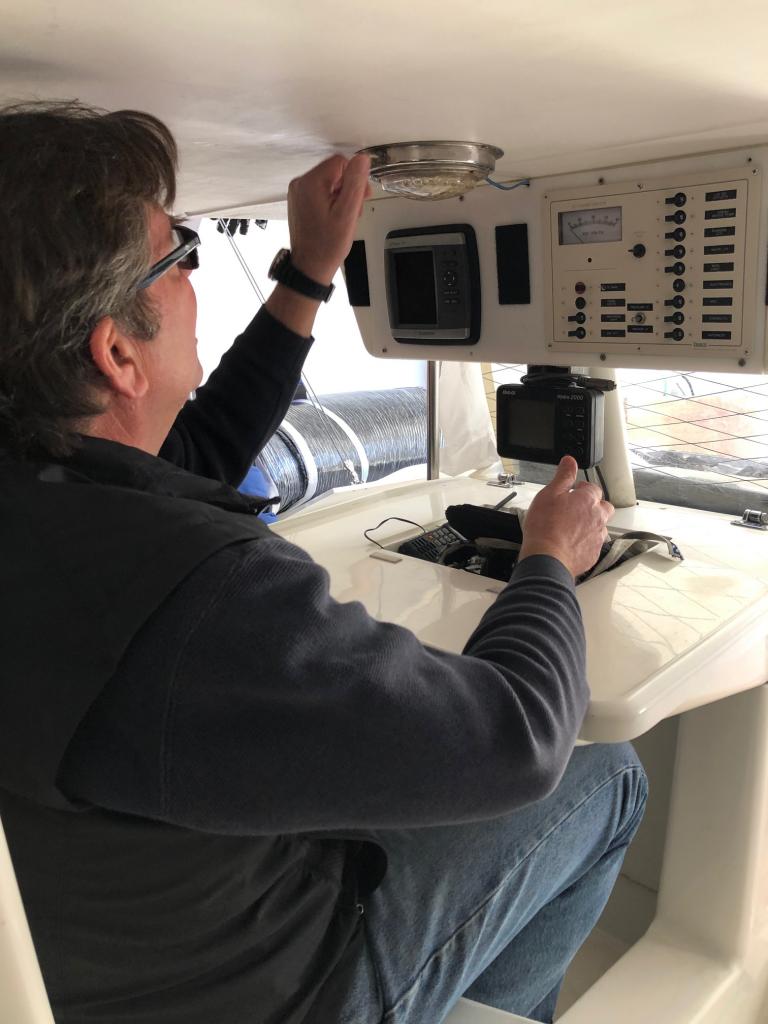 HK: I’ve done the Farallones race a number of times. The race to Stockton is pretty long too. I also used to deliver sailboats down the Pacific coast, which was a blast. I’d get a couple of friends to go with me and we’d make about , 4-5 knots down the coast to San Diego or wherever, have some beers, hang out; make sure someone’s up at night to keep watch. Then it’s funny: you hop on a plane afterwards and in an hour you’re home. BZ & I sailed to Catalina Island and back with another couple years ago. That was an epic adventure.

MK: Is sailing a rain-or-shine kind of thing?

HK: Well, kind of yeah. We just have to be prepared. It’s a whole lot of fun. We always just make sure to keep the beers stocked for the trip back.

MK: I’ve heard that people who go out on the water a lot are more peaceful. Would you find that’s true?

HK: You know, there are a lot of kooky people out here. A lot of characters (we crack a joke about present company included). And over the years you form friendships–it’s a big community out here. But yes, I’d say it’s very peaceful. It’s a relaxing place to be. I love it.

MK: Is there anything you carry over from sailing and yacht racing, into your job–or into your life in general?

HK: Well, I like the saying, “Everything in life we’ve learned in kindergarten.” So, don’t take things that aren’t yours; be nice to people; clean up your own mess; share everything. I think those ideas carry into everything…sailing, work and life. Another thing that I really believe is that any job worth doing is worth doing well. Some of those really basic ideas, I think we often forget.

Hans says he’s had a weird life, but it seems that these weird experiences have shaped him into an expert in all the things he loves. The challenges in his childhood and those with prior jobs, the finding your place in the world feeling: they’ve made for a happy guy. As we’re leaving he says he might like to join the Yacht Club with a leadership role. He spent 9 years on the ASPE Board and was Chapter President for three years– and wants to use some of those skills to give back to the sailing community. Always the life learner, this one. He sighs happily and says, “Ah, nothing recharges you like a day on the water.”

Michelle Kicherer is a fiction writer and music journalist living in Oakland, CA. She writes for The Deli Magazine, The Bay Bridged, SF Station and others. She enjoys long walks and her second novel is in the works. Instagram @michellekicherer

Hans Kaufmann is the Division Business Development Manager for California and Nevada.

“I truly believe that in any business, not just ours, we are in the business of people…” An Interview with President & CEO Bob Polizzi